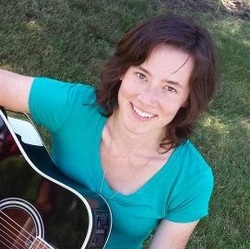 Rachel White is a 22-year-old singer/songwriter from Grand Rapids, Michigan.   She is also one-half of acoustic folk-rock duo, Lighting Matches, with Matt Plessner.

Her first album, “Destination Sunday,” released in June 2016, was produced by Joel Ferguson (The Verve Pipe, Papa Vegas) at Planet Sunday Studios.  Every song was written or co-written by Rachel.  The songs showcase a variety of styles, ranging from the country-pop of “Good Kind of Criminal,” to the indie rock of “Brave,” to the sound of tropical steel drums in “By The Sea.”

In the spring of 2015, Rachel wrote a song about STAR 105.7 (Grand Rapids) morning DJ’s Tommy & Brook.  They liked the song so much that they played it on the air the next morning.  Rachel was also a semifinalist in the 2015 NASH Next Country competition, making it into the Top 70 nationwide.

Rachel got her first guitar at age 11 after being inspired by Kenny Chesney and Keith Urban concerts.  She played off and on throughout her teen years, however, it wasn’t until her late teens that she decided to make music her career.  At age 20, she began writing her own songs and performing live.

Rachel and her mom, Sandi, wrote “By The Sea” while sitting on the beach in Clearwater, Florida.  They found themselves so relaxed and content with their surroundings, that it inspired them to write “By The Sea,” a fun, tropical song about being in the moment and letting the ocean take your cares away.
Also inspired by country artist Hunter Hayes, Rachel decided to write a fun song referencing some of Hunter’s own lyrics. “Good Kind of Criminal” creatively features 13 of Hunter’s song titles.  (“You ‘Light Me Up’ like a ‘Flashlight’ on a moonless night // You’re the ‘Wildcard’ changing my ‘Storyline’.”)

In the spring of 2016, she visited Planet Sunday Studios, and soon after began working with Joel Ferguson on recording her debut EP.  Joel also lends backing vocals on “Superman,” one of Rachel’s favorite tracks on the album.  “Destination Sunday” is available on iTunes, Spotify, CD Baby, and most other major online distributors.

In January of 2017, Rachel was nominated for 3 Jammie Awards (88.1 WYCE) - Best Americana Album, Album Of The Year, and Best Album By A New Artist.